All natural birth has a purpose and a plan;
who would think of tearing open the chrysalis as the
butterfly is emerging?
Who would break the shell to pull the chick out?
~ Marie Mongon, Hypnobirthing. 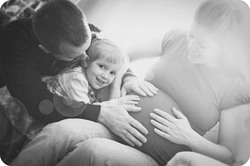 The safety and benefits of midwifery care have been proven again and again in countries across the world, including the United States. The World Health Organization statistics show that births attended by midwives have lower infection rates, lower Cesarean section rates, fewer complications and healthier outcomes—thus, lower overall medical costs—than physician-attended hospital births. In addition, there is no difference in infant mortality between midwife-attended and physician-attended births for low-risk women. Countries such as the Netherlands, Sweden and New Zealand, which have the best birth outcome statistics in the world, use midwives as their main maternity care providers.

In the fall of 2014, Britain's National Institute for Health and Care Excellence has urged women with uncomplicated pregnancies to have their babies at home with qualified midwives sating that "they were better off in the hands of midwives than hospital doctors during birth. For these low-risk mothers-to-be, giving birth in a traditional maternity ward increased the chances of surgical intervention and therefore infection. Hospital births were more likely to end in cesarean sections or involve episiotomies, a government financed 2011 study carried out by researchers at Oxford University showed. Women were more likely to be given epidurals, which numb the pain of labor but also increase the risk of a protracted birth that required forceps and damaged the perineum. http://www.nytimes.com/2014/12/04/world/british-regulator-urges-home-births-over-hospitals-for-uncomplicated-pregnancies.html?_r=0
http://www.nytimes.com/2014/12/04/world/british-regulator-urges-home-births-over-hospitals-for-uncomplicated-pregnancies.html?_r=0

South Shore Home Birth Midwifery believes in birthing at home and the Midwifery Model of Care, developed by the Midwives Alliance of North America, which is a fundamentally different approach to pregnancy and childbirth than contemporary obstetrics. Midwifery care is uniquely nurturing, hands-on care before, during, and after birth. Midwives are health care professionals specializing in pregnancy and childbirth who develop a trusting relationship with their clients, which results in confident, supported labor and birth. While there are different types of midwives practicing in various settings, we are trained to provide comprehensive prenatal care and education, guide labor and birth, address complications, and care for newborns. The Midwives Model of Care is based on the fact that pregnancy and birth are normal life events. The Midwives Model of Care includes:

The application of this model has been proven to reduce to incidence of birth injury, trauma, and cesarean section.